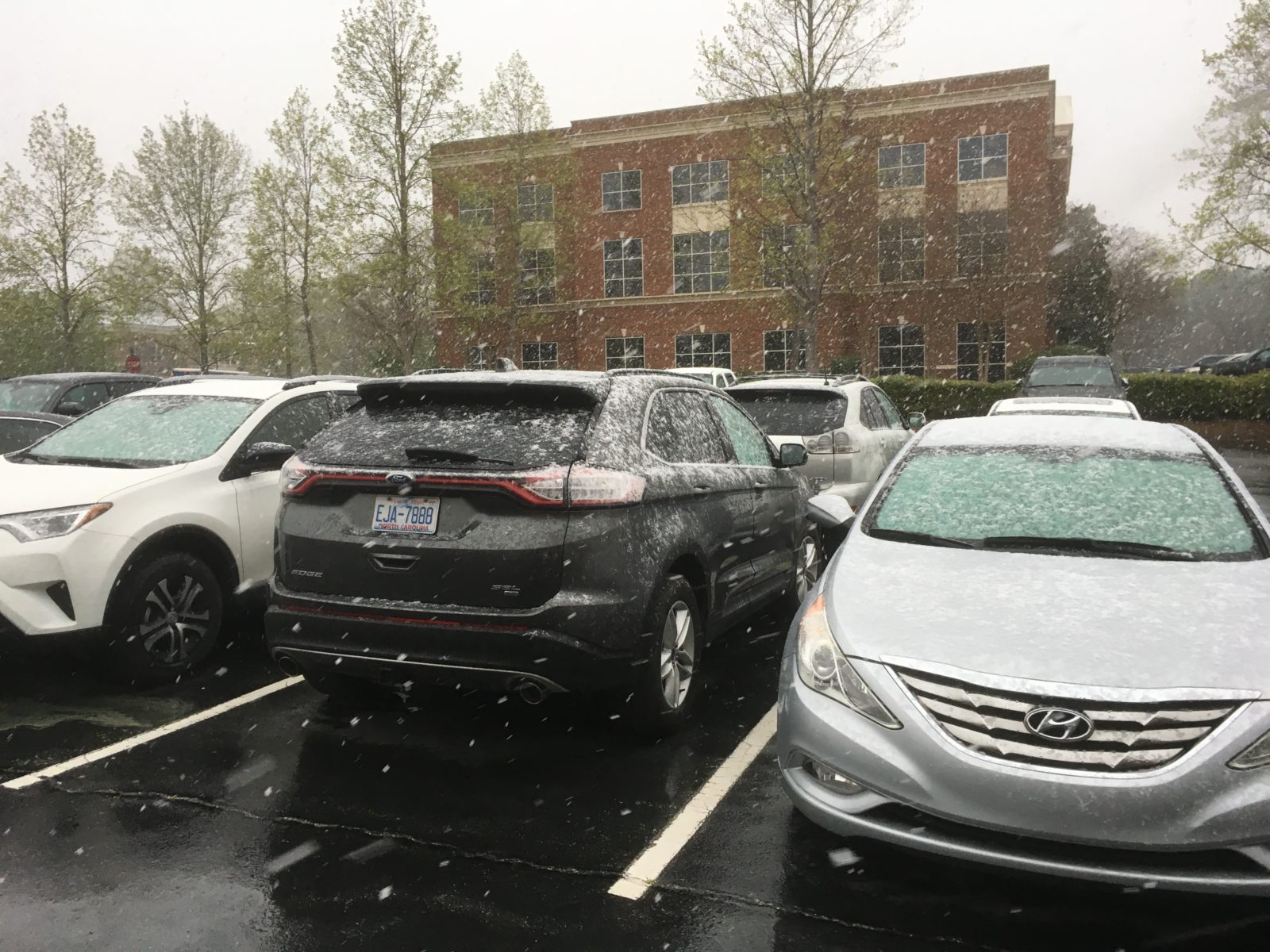 A rare weather occurrence appeared on the morning of April 2 in my hometown of Charlotte, NC—Snow!

Though it wasn’t a major snowstorm by any stretch of the imagination, it was snowing there nonetheless. If the pictures my dad sent me had hit my iPhone a day earlier I would have though he was playing an April Fools’ joke on me. As it was, I was still somewhat skeptical. All of us from that area of North Carolina know it is extremely rare to get snow this time of the year. In fact, according to the National Weather Service, it was only the second time time since 1915 that Charlotte had measurable snowfall in the month of April. Now don’t get too excited or let your imagination run away with you. The total accumulation was only 0.1 inch.

My dad and sister both said they spotted the first flakes about 6:60 a.m., and snow continued falling until around 10:30 a.m. The snow accumulation was mostly on the grass and trees, and not sticking on the streets or sidewalks. This was probably because just a few days earlier on the Saturday before this snowfall the temperature had reached 80 degrees. With temperatures plummeting to the 30s on that snowy Tuesday, they said it felt more like winter than spring. But they both agreed it was beautiful.

As I looked at the pictures on my phone, I began to wish it was snowing here in Chapel Hill. Then I began to wonder what it is about snow that makes it so appealing, at least to me anyway.

For one thing, snow is a major change of scenery in the South. It’s a very pleasant and welcome change from the normally drab gray and brown of the winter months. Everything becomes white and bright.

It also just doesn’t snow that much here. Some winters go by without even one flake of snow. So it is the rarity that brings with it a certain amount of excitement and wonder.

Watching the snow fall is beautiful and relaxing. It is nature at its best. It’s even more beautiful as it settles on the lawn, shrubs, and tress, and turns everything into a winter wonderland. In North Carolina when it snows almost everything shuts down. It’s so quiet and peaceful with no cars speeding up and down the streets with horns blaring. It’s hard to beat the silence and calm of a fresh snowfall.

Growing up as a kid I used to always wish for snow because it meant a lot of fun and a good possibility of no school for the day. My siblings and I loved to go outside and build snowmen, make snow angles, have snowball fights, and go sledding down the hill in our backyard. An oh, the snow cream! Seriously that’s enough said in itself.

I think a lot of us develop a love for the snow as kids. A snowfall makes us reach back to those fun and happy times. When there is a snowfall here on campus, most every student will be outside playing in the snow. Someone told me once that when it snows you have two choices: shovel or make snow angles. I’m definitely making snow angels.